While science is fun, most of the time, it does have its routine side. Scientific equipment has to be maintained and repaired, and when it gets too long in the tooth needs to be rebuilt or replaced. So, for the last few months we have been upgrading our laser fluorination line. Our lab specialises in the oxygen isotope analysis of meteorites. We do this by heating small amounts of sample, generally no more than about 2 mg (i.e. 0.002 grams), in the presence of a strong fluorinating agent called bromine pentafluoride (BrF5). This chemical reacts with the sample, replacing any oxygen it contains with fluorine. We then clean up the oxygen that has been released, before analysing its isotopic composition using a dual inlet mass spectrometer (MAT 253).

Reaction between the sample and bromine pentafluoride is essentially negligible at room temperature and so heating is required to speed things up. To do this we use a 10.6 micron infrared CO2 laser. As with any bit of kit, such lasers have a finite lifetime and our old one had reached the end of the road. So we needed a replacement. We decided to go the extra mile and also upgrade our stage control system as well. Happily these days, both the laser and stage controller are available as an integrated package. We went for the Photon Machines Fusion 10.6 Stepped Heating System. 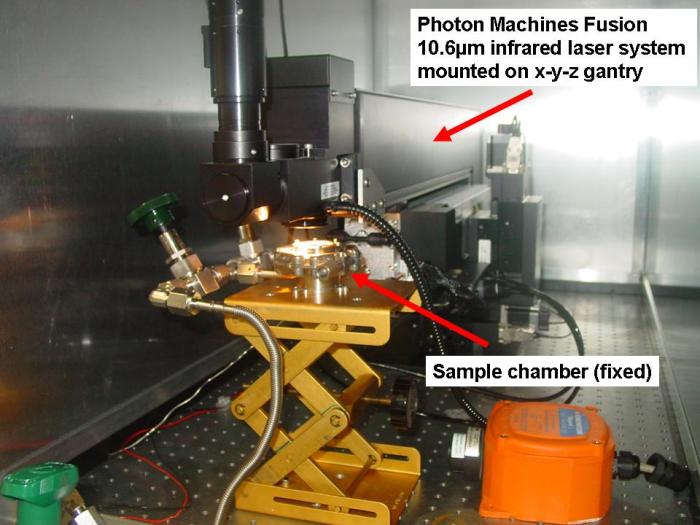 The new Photon Machines Fusion laser and sample cell are housed inside a laser safety box. The cell can be moved in a vertical direction for sample loading but is kept in a fixed position when the laser is in operation.

In our old system the laser was fixed and the sample chamber was moved using a set of x-y-z stepper motors to bring each individual sample under the beam. The new system works in completely the opposite way, with the sample chamber fixed and the laser moving on an x-y-z gantry. To drive the laser and stage, the new system comes with some very nice, user friendly software. In fact the guys at Photon Machines even responded to a request from us to move one of the software buttons and sent out an upgrade incorporating our bespoke change.

As you can imagine it hasn’t all been smooth sailing. The new laser has a power output of 50W, compared to 25W for our old system. This has great advantages in terms of being able to react materials quickly and efficiently, but has also caused problems due to increased amounts of “fogging” of our optic window. This is caused by waste products from the fluorination reaction condensing on the relatively cold BaF2 window. Once the fogging reaches a certain level the camera viewing system is ineffective, with the result that you are left operating the system blind. This problem has been solved by increasing the distance between the cell window and the samples. Other minor changes have been required and the result, of course, is that sample throughput has been reduced. This can be difficult to explain to outside research collaborators who are keen to get results. But most folk are pretty understanding.

So, now with the refurbishment work complete, calibration tests successfully run, we are back in business We have a lot of fascinating projects in the pipeline. I am going to keep you posted on this website about all these up-and-coming projects.