It’s not easy trying to figure out the origin and early evolution of the Solar System using just a bunch of smashed up space rocks. A bit like trying to study an ancient civilization when all you have are a few bits of broken pottery and a rusty broach. Yes, making sense of the meteorite record can be tough! One approach is to compare what we have with what geochemical models predict we should have. Based on the evidence from iron meteorites we know that the very early solar system was full of small, molten mini-planets, so called “planetesimals”. These then merged by collisions to form the terrestrial planets, including Earth.

The Willamette meteorite is a magmatic iron of the IIIAB group. Weighing in at 15 metric tons it is the largest North American meteorite. image: American Museum of Natural History

So an interesting question to ask is what should you get when you melt primitive solar system materials to form these mini-planets? A lot of modelling work has been done to understand the structure of the best known mini-planet, asteroid 4 Vesta, which was studied in detail by the NASA Dawn spacecraft. It turns out you should get a layered body with a central iron-rich core, overlain by a very thick “mantle” dominated by the mineral olivine and an outer, relatively thin, layered crust. 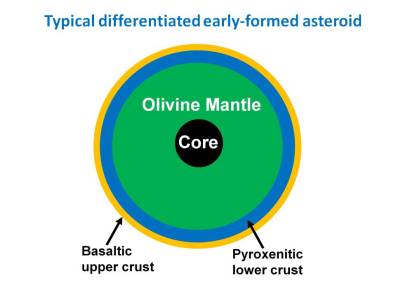 Iron meteorites may provide an additional constraint. Those that come from the cores of melted asteroids are known as magmatic irons. Analysis of these irons suggests that they come from up to 60 distinct melted asteroids. In comparison, rocky meteorites from such asteroids were, at least until recently, considered to be samples from a much smaller number of parent bodies, perhaps 20 or so at best.  Of course one big problem in comparing these two set of samples is that irons are much more robust than silicate-rich meteorites and survive as small objects in space for longer. This is clear from their cosmic ray exposure ages, which are often as much as 10 times greater than silicate-rich meteorites.

So where are we with the “Great Dunite Shortage” now? Well, recently I presented a seminar on this thorny problem at our weekly research group meeting. As I explained in the talk, one of the real issues is trying to define just how many parent bodies are represented in our meteorite collections. Some groups are easy, and despite having lots of individual specimens, we are confident that all the samples are from a single asteroid. Good examples of this are the angrites, main-group pallasites, winonaites, acapulcoite-lodranites. Some groups are a bit trickier. The vast majority of the so-called HEDs probably come from 4 Vesta, but there are also a number of HED-like meteorites that probably don’t. The meteorite Ibitira is a good example. Finally, there is an increasing number of what are called “ungrouped achondrites” whose affinity we are completely uncertain about. Some may be related to the more populated groups, but others like the meteorite NWA 7325, are probably samples from unique asteroids for which we have no other specimens. When you take all of these ungrouped achondrites into consideration the mismatch with the irons may be much less important than we previously thought.

So is this the end for the “Great Dunite Shortage?” Well, the honest answer is that it is still too early to tell. This is an exciting time for meteorite science as new and interesting samples are increasingly becoming available from dense collection areas such as Northwest Africa. However, working out the interrelationships, if any, between these meteorites is far from straightforward. It is definitely a case of watch this space for further updates.