I am a really big fan of PSRD – that’s Planetary Science Research Discoveries to give it its full title. PSRD was jointly founded by planetary geoscientists Jeff Taylor and Linda Martel, who are based at the University of Hawai’i at Mānoa. The aim of the site is to provide the public with a scientists’ perspective on new and fascinating discoveries in the field of planetary science. Articles on PSRD have a clear, authoritative style and always convey the essential aspects of new research without compromising the underlying science. Not an easy thing to do. This is public outreach at its very best.

This large iron meteorite, which is over 2 metres in long dimension, was located on Mars by the  NASA Curiosity rover and has been given the name Lebanon.. The smaller rock in the foreground is also an iron meteorite (Lebanon B). The most recent PSRD Headline Article discusses a feature in the magazine Elements by James Ashley, which documents meteorites found on Solar System bodies other than the Earth. Image: NASA

PSRD uses a simple homepage structure, which facilitates easy navigation to the various subsections of the site. The main area of content is the Headline Article, which generally focuses on a recent paper, or related set of papers, that provide some new or fresh insight. The most recent article is a case in point. Meteorites that land on Earth today, or in the very recent past, provide a somewhat limited snapshot of Solar System materials. Did this flux vary in the past, or is it different on other present-day Solar System bodies compared to Earth? The latest PSRD article highlights three papers that give distinct perspectives on this problem.  Katherine Joy and co-workers highlight how the Moon acts as a storage facility for a vast range of Solar System materials that have impacted it over a long period of time; James Ashley looks at meteorites that have been discovered by rovers on Mars and Birger Schmitz and colleagues have studied a unique 470-million-year-old fossil meteorite from Sweden that appears to be absent from the present-day meteorite population. This PSRD Headline Article is a nice length, with lots of great images that help to illustrate the key points of these research papers.

Österplana 065 meteorite,Thorsberg quarry, Sweden. Analysis of relict minerals from this ancient meteorite have a composition unlike any found in meteorites arriving on Earth today. The most recent PSRD article has further details. Image: wikipedia

One of the nice things about the Headline Articles on PSRD is that they are accompanied by a downloadable summary PowerPoint slide. It’s a helpful resource that can be used as part of a seminar discussion. The site also contains shorter articles on new research under the title CosmoSparks, a section on instruments in cosmochemisty and a general resource area with lots of further information and links to other sites.

Finally, I have to confess a personal interest here. Recently, Jeff Taylor wrote a very nice summary for PSRD highlighting our oxygen isotope review paper. Pulling together a relatively long article like this can sometimes feel like a bit of a slog, so it is always great to get a bit of help in spreading the news once the paper is finally published.

PSRD is a really nice site, with a great approach and loads of informative content. For a clear view of what’s fresh in planetary science visit PSRD. You know it makes sense! 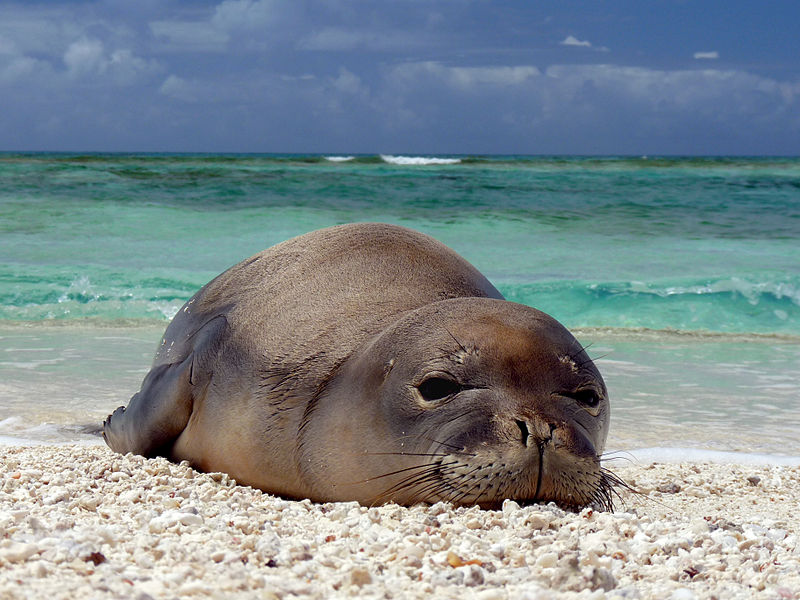 Hawaiian Monk Seal on the beach of French Frigate Shoals, the largest atoll in the Northwestern Hawaiian islands. Image: Wikipedia.