On September 21st 2013 at about 3pm local time a 1.5 kg stone fell less than one metre away from where Mr Adeildo Silva was standing in the village of Borracha, near Vicência, Brazil. It was a lucky escape! The stone turned out to be an ordinary chondrite, type LL3.2. Should we be interested? Well at first glance, no, not really! Ordinary chondrites are, um, well, sort of ordinary really. But like most things in science, a first glance is never enough. So here is why the Vicência meteorite is, in fact, very far from being ordinary. 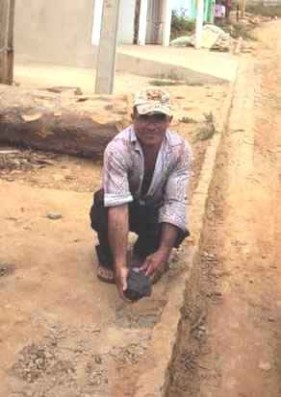 First of all, what is an ordinary chondrite? OK, so as their name suggests ordinary chondrites are not a rare type of meteorite. Of the 52,713 officially named meteorites currently listed on the Meteoritical Bulletin database 45,692 are ordinary chondrites, that’s 86.7%. Even the LL group is relatively common, with 7,104 official specimens it represents 13.5% of all known meteorites. But Vicência is a “fall” i.e. picked up immediately after its flight through the Earth’s atmosphere, whereas the vast majority of meteorite samples are “finds” and so were collected often long after their arrival. Falls are particularly valuable because they are almost pristine, whereas finds, which have sat out in the weather often for long periods, can be severely altered. Vicência is also a type 3, which means it suffered very little heating and on its parent asteroid. For some strange reason meteorites are graded 3 to 6, with type 3 being the least heated and type 6 the most heated. As a type 3 ordinary chondrite fall Vicência is one amongst a group of only 45 other samples of such pristine material available to science.

So you see Vicência is already starting to look like a bit of gem. But it gets worse, er sorry, I mean better!

Type 3s are further subdivided using a decimal point scale going from 3.0 (least heated) to 3.9 (most heated).  Vicência is 3.2, which makes it almost pristine. In fact, amongst the LL group only two other meteorites are more pristine, Bishunpur LL3.15 and Semarkona LL3.0. Far from being ordinary Vicência is an extraordinary sample, which is why Klaus Keil of the University of Hawaii put together a large international consortium to study this valuable space rock. At the Open University we were extremely excited to be part of this team. 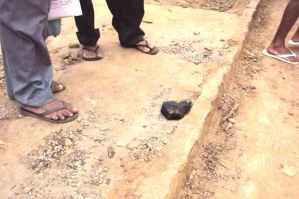 The Vicência meteorite as it was found shortly after its fall image: Diario de Pernambuco

The results of the consortium study were published earlier this year in the journal Meteoritics and Planetary Science. Lots of valuable information was collected about the meteorite, but one item was particularly intriguing. Measurements of oxygen isotopes in a mineral called fayalite were able to demonstrate that it formed during water-rich alteration within an asteroid just 4 million years after the formation of the Solar System. As the Solar System is about 4,567 million years old this makes it an extremely early event. Meteorites are bits of asteroids and in the case of Vicência it originally came from a small body that obviously formed very early and heated rapidly enough for water to alter its mineral constituents. On the other hand, the Vicência sample must have been located in a relatively cool part of this asteroid because it was only ever gently heated, as indicated by the fact that it is a type. 3.2.

Vicência clearly has a lot to tell us about conditions that prevailed on asteroids that formed in the very earliest stages of solar system history.  And why might this be important you ask? Well, such asteroids were probably the building blocks of Earth and the other terrestrial planets. Meteorites may come from a long way away, but they carry with them information that is critical to our understanding of how our planet formed. Not bad from a chunk of rock that landed quite by accident one quiet afternoon in Brazil.

Featured image: Carnival in the nearby town of Olinda, Pernambuco, Brazil image: Wikipedia,