It’s a bright, frosty Monday morning in late November and I’m sitting in the Berrill Café at the Open University, waiting for Graham. He is stuck in a bit of traffic on the A5. Eventually he makes it and we have a quick coffee and discuss plans for the coming week. Our aim is to classify a big heap of meteorites that Graham has collected on his travels. An active member of the British and Irish Meteorite Society (BIMS), Graham Ensor (top right) has a knack of getting hold of interesting extraterrestrial samples. Some of Graham’s samples were collected on meteorite hunting expeditions, others from shows such as Ensisheim and quite a few from dealers and contacts on the internet. 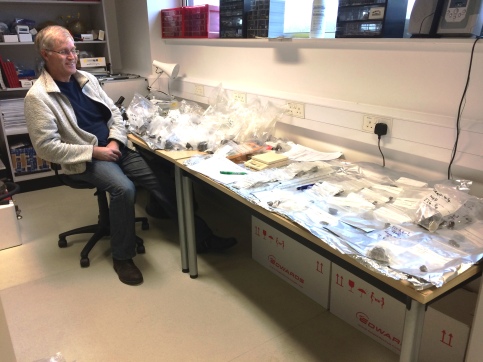 We had quite a few samples to get through! 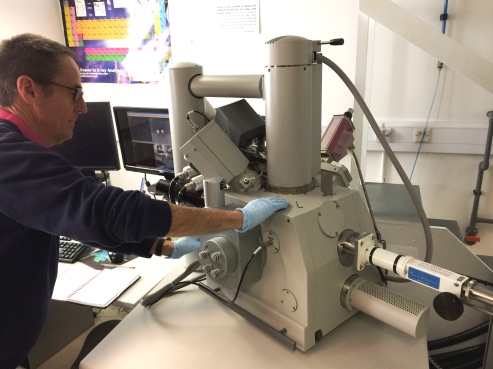 In goes another sample!

We would have our work cut out classifying these samples. To be fair, we had already done quite a lot of preparation. The samples had been sliced, polished sections made, preliminary examinations carried out and even some oxygen isotope analyses undertaken on a few of the more problematic specimens.  But this was going to be the week we nailed it! Using both optical and scanning electron microscopes we planned to identify which meteorite groups the samples belonged to. There were various other features we would need to identify, such as their shock grade and the extent to which they had been weathered after their arrival on Earth.

Graham is clearly pleased with how things are going!

So how did we get on?

The problem was we had more than forty samples to get through! Even if they all had been straightforward types, such as equilibrated ordinary chondrites, we would have had our work cut out. But included in the batch were several carbonaceous chondrites, a number of HEDs and various type 3 ordinary chondrites. By Friday, after five tough days of classification work, the job was far from complete.

Graham getting serious with the meteorite splitter!

So, were we depressed?

No way! In fact, just working on these samples was inspirational. We had seen some incredible features and textures that had important things to say about early Solar System processes. Like the howardite that was full of both metal blebs and dark inclusions. It probably formed on the surface of asteroid 4 Vesta and contained material from at least two types of exotic, non-Vesta derived meteorites, one metal-rich and the other of carbonaceous chondrite affinity. Then there was an ordinary chondrite that contained a wide range of fragments that had been heated to widely different degrees. In fact, we were able to establish with a high level of confidence that this sample was probably a piece of the widely distributed L3-6 regolith breccia NWA 869.

NWA 869 is a bit of an old friend as I had worked on it in the past with colleagues at the Institut fur Planetologie in Germany, One of the largest meteorite finds from North Africa, Dean Bessey, the dealer who handled much of the material, is quoted as suggesting that the total recovered mass of NWA 869 is on the order of a whopping 7 metric tons! Many of these recovered stones have well-developed fusion crust and some individuals can weigh more than 20 kg. Grahams piece came in at a pretty reasonable 12 kg.The study of Metzler et al. (2011) suggests that it probably formed as surface material (regolith) on the L chondrite parent asteroid. The vast amount of NWA 869 material available for scientific study should help to facilitate new research into regolith processes on asteroids.

A slice through NWA 869 shows it to be a complex breccia composed of both angular and rounded clasts of various L group-related rock types.

Well, with space missions such as Hayabusa 2 and OSIRIS-REx on their way to sample material from the surface layers of asteroids, the more we can find out about the processes that operate in such a harsh space environment the better.

OSIRIS-REx, launched in September 2016, will collect (hoover-up!) material from the surface layers of Asteroid 101955 Bennu and then return the samples to Earth in 2023.

So you can see that while we didn’t exactly finish the job we did have a fun week. More work required, but I’m looking forward to it! Further updates in due course.