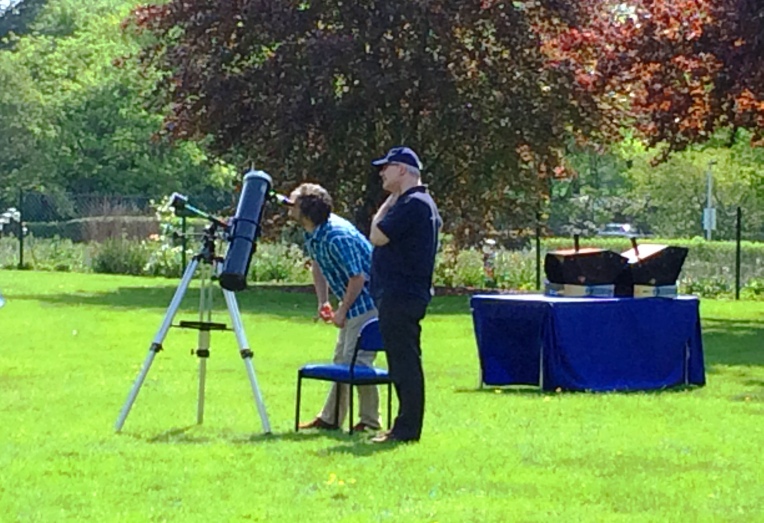 Last Monday, the Open University astronomers set up their telescopes on the Mulberry Lawn to observe the transit of Mercury. The forecasters had predicted a nice sunny spell in the afternoon and, as usual, they were absolutely spot on. Of course, you can watch this sort of event live on the web, or look at stunning images on the evening news, as captured by some sort of super-massive, ginormous telescope. But there is nothing quite like observing one of these rare astronomical events live, outdoors, with a well-calibrated, not-quite-so-massive, optical telescope. So what did I actually see when I looked down the eyepiece? Well, there was Mercury; a dark, sharp, very tiny dot, dwarfed by the giant face of the Sun, across which it was imperceptivity moving. Mercury was even smaller than some nearby sunspots. Of course, Mercury is the smallest of the planets, only slightly larger than the Earth’s Moon. And yet the fact that Mercury appeared so small was not really an anti-climax. On the contrary, it gave me a deep sense of awe at the scale of the Solar System and, in particular, the overwhelming size of our Sun. In fact, the Sun is absolutely enormous, representing somewhere between 99.8 and 99.9% of all the matter in the Solar System. In contrast, the terrestrial planets (Mercury, Venus, Earth, Mars) are the equivalent of insignificant specs of dust. All rather humbling really.

Transit of Mercury on May 9th 2016 as imaged by the Dupont Planetarium, University of South Carolina.

2 thoughts on “A Transient Perspective”